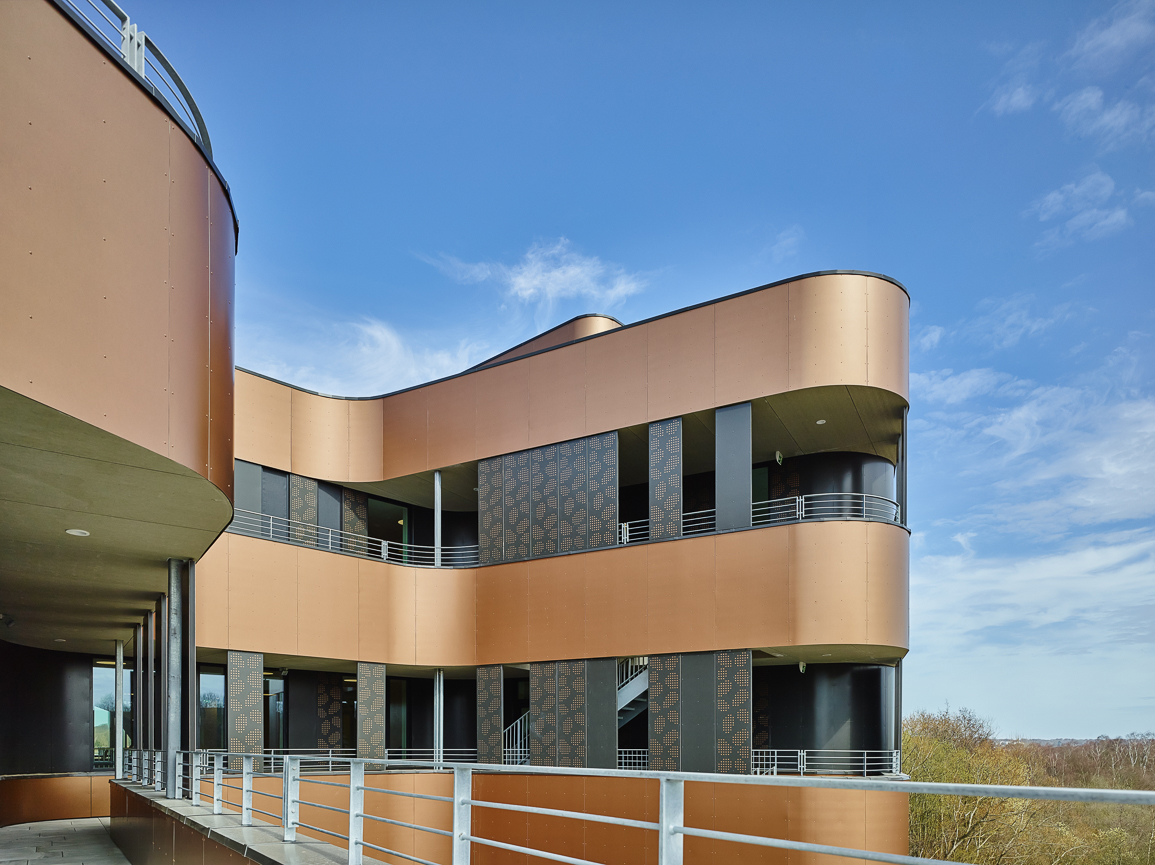 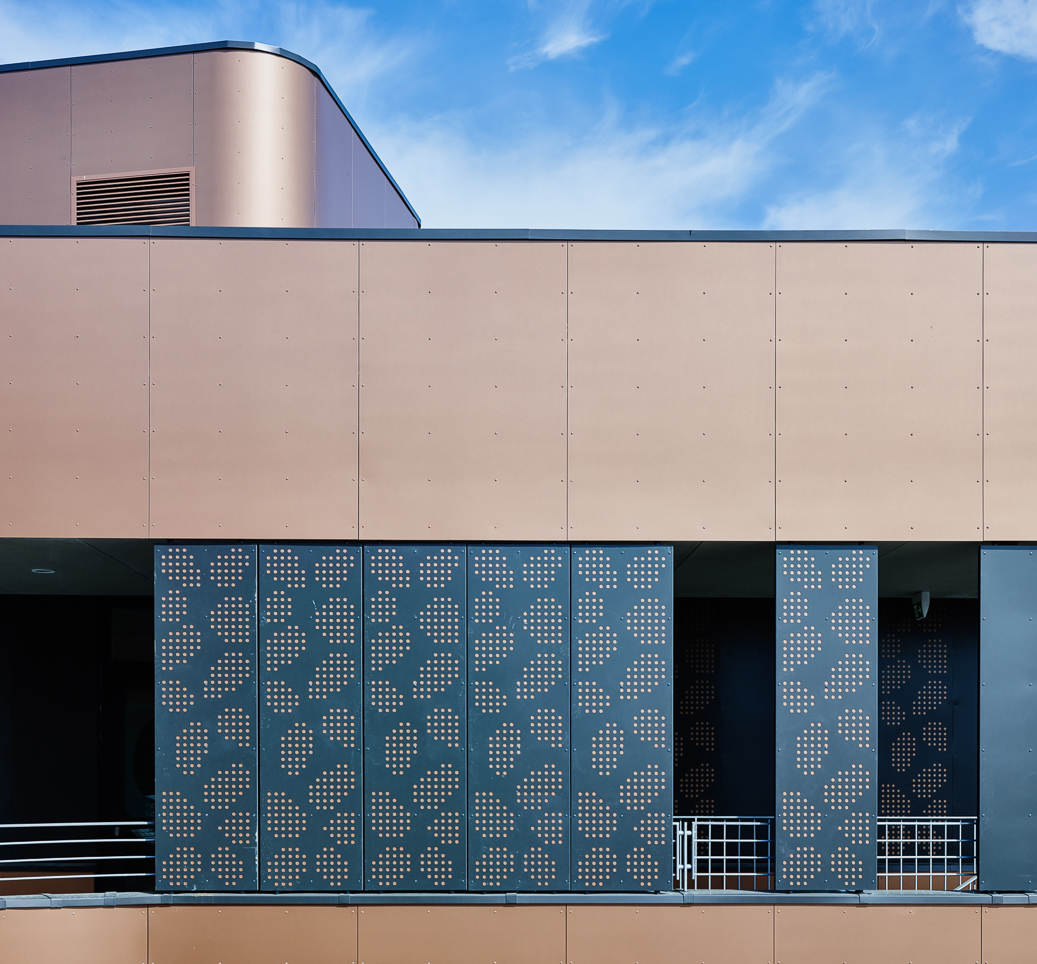 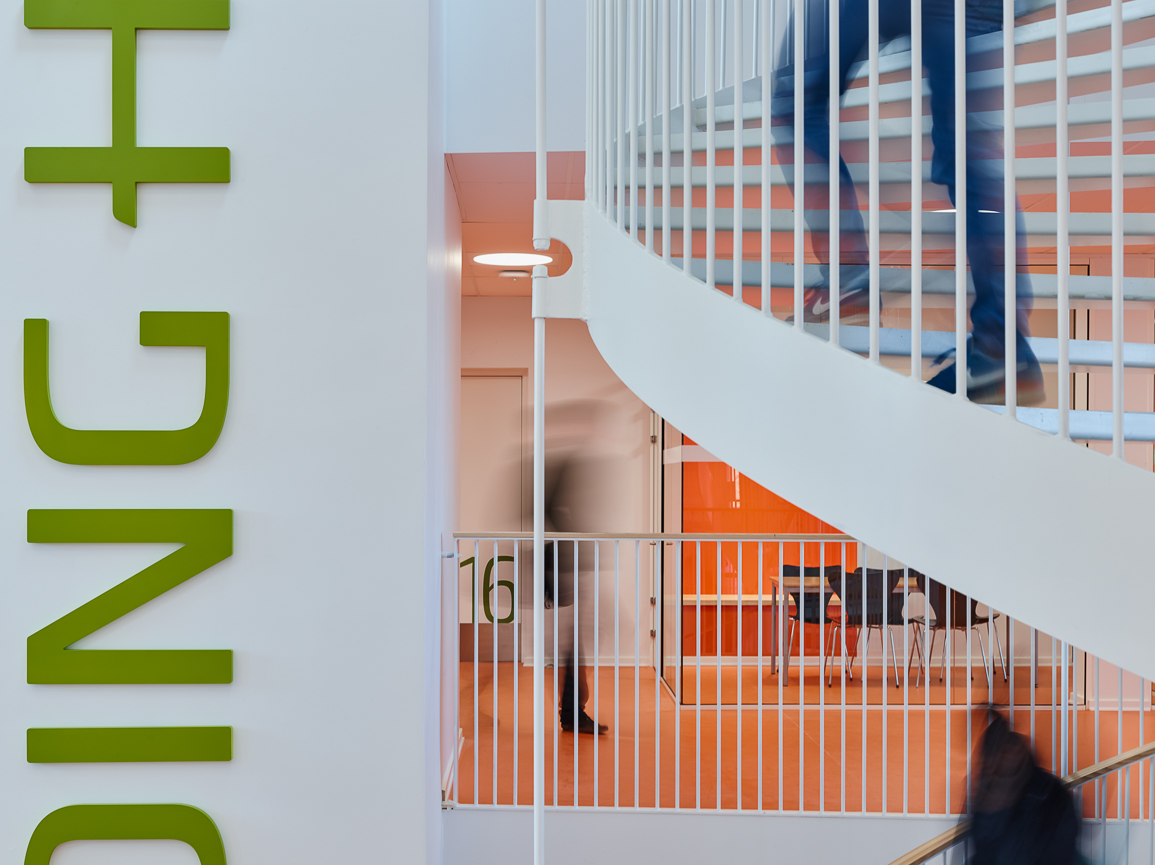 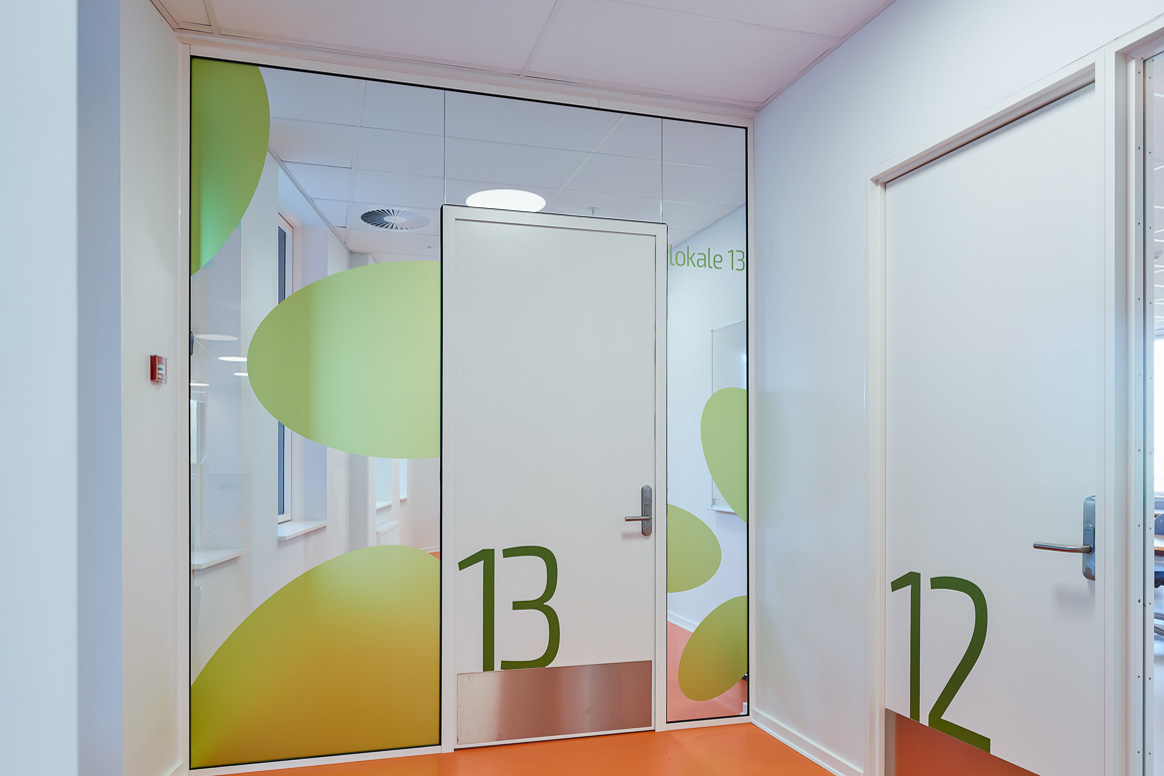 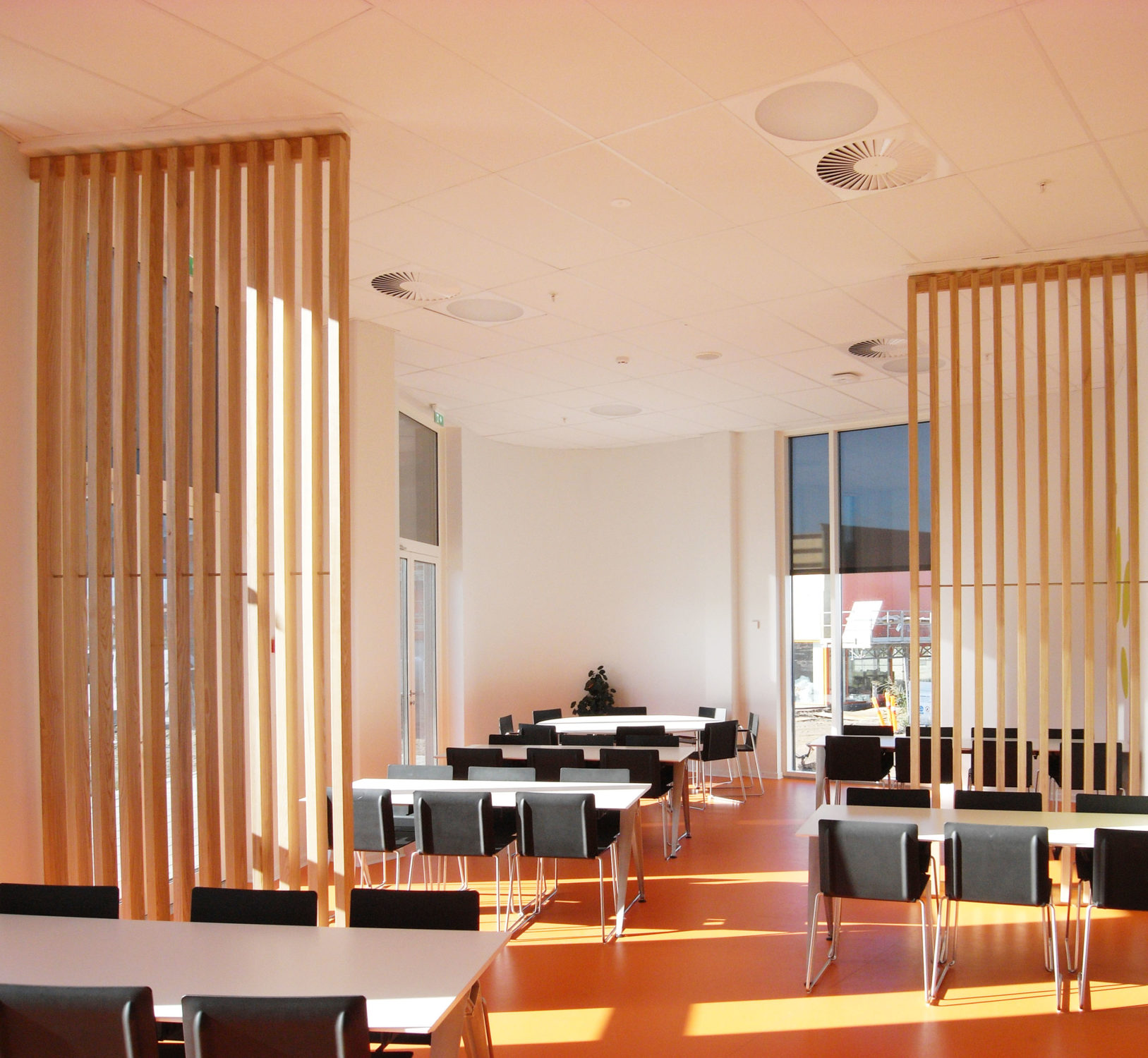 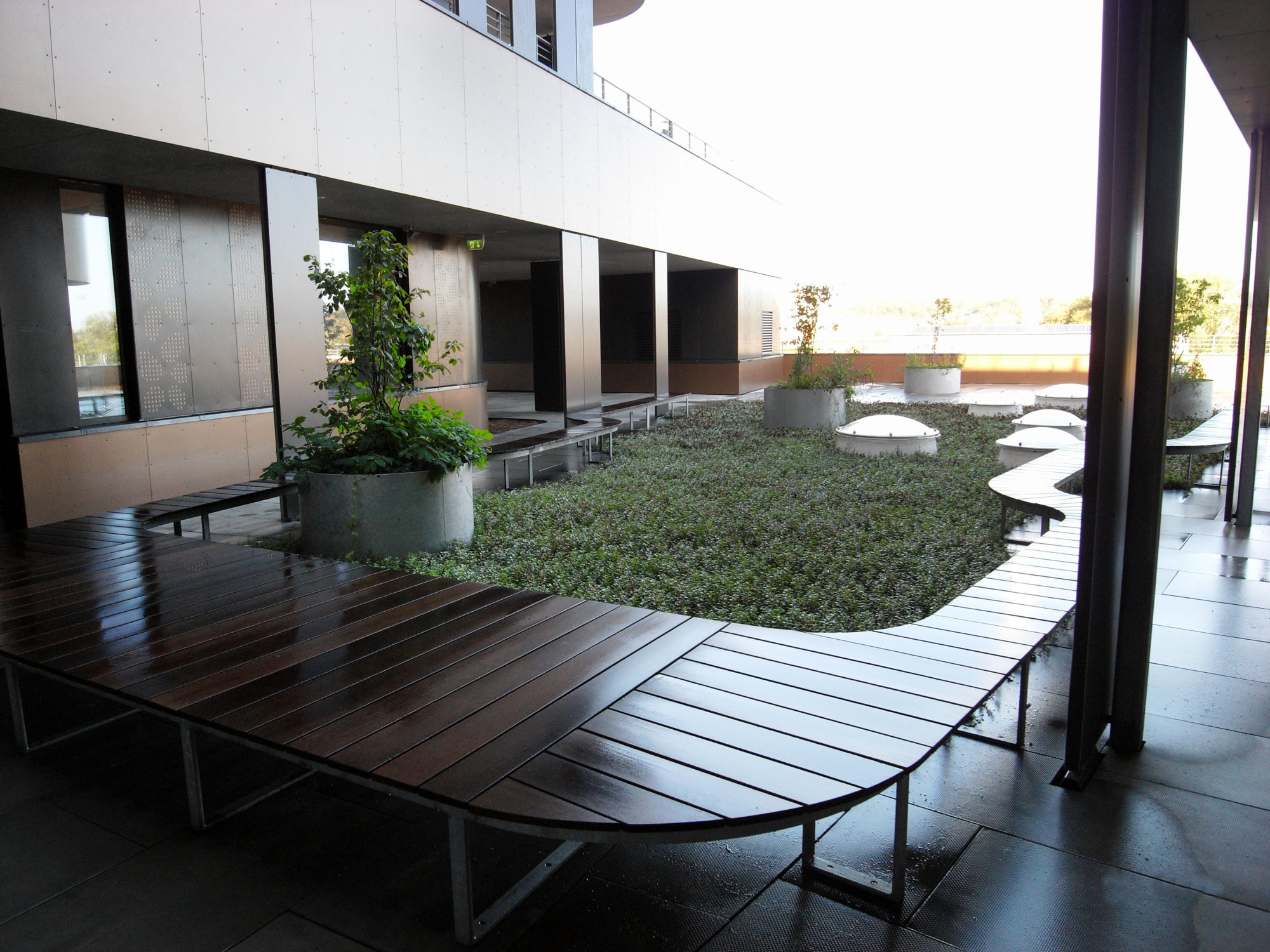 Kolding HF & VUC has won a major architectural competition. The diverse study environment unfolds in diverse learning spaces and blends into the open and accessible ground floor with the special innovative environment created in the plan for the sustainable Design City Kolding. Kolding HF & VUC was recognized for its functional and architectural value when the project received the Kolding Municipality Architecture Award in 2015.

A learning environment with visionary and diverse learning spaces

Kolding HF & VUC is characterized by a diverse study environment with a wide spectrum of educational programs. The school offers an adult educational environment shaped for both individual training and a strong community for students. Schools program asked for the project to re-think the learning environment with visionary and diverse learning spaces.

The school is organized as a city-in-the-city, which in the interior is characterized by the same openness with the interaction between common areas and semi-public zones that invite residences and workers in an open and visible environment, in which all the corridors are effectively used for living, study and meeting areas, while the main staircase is like a living sculpture in center of the building. 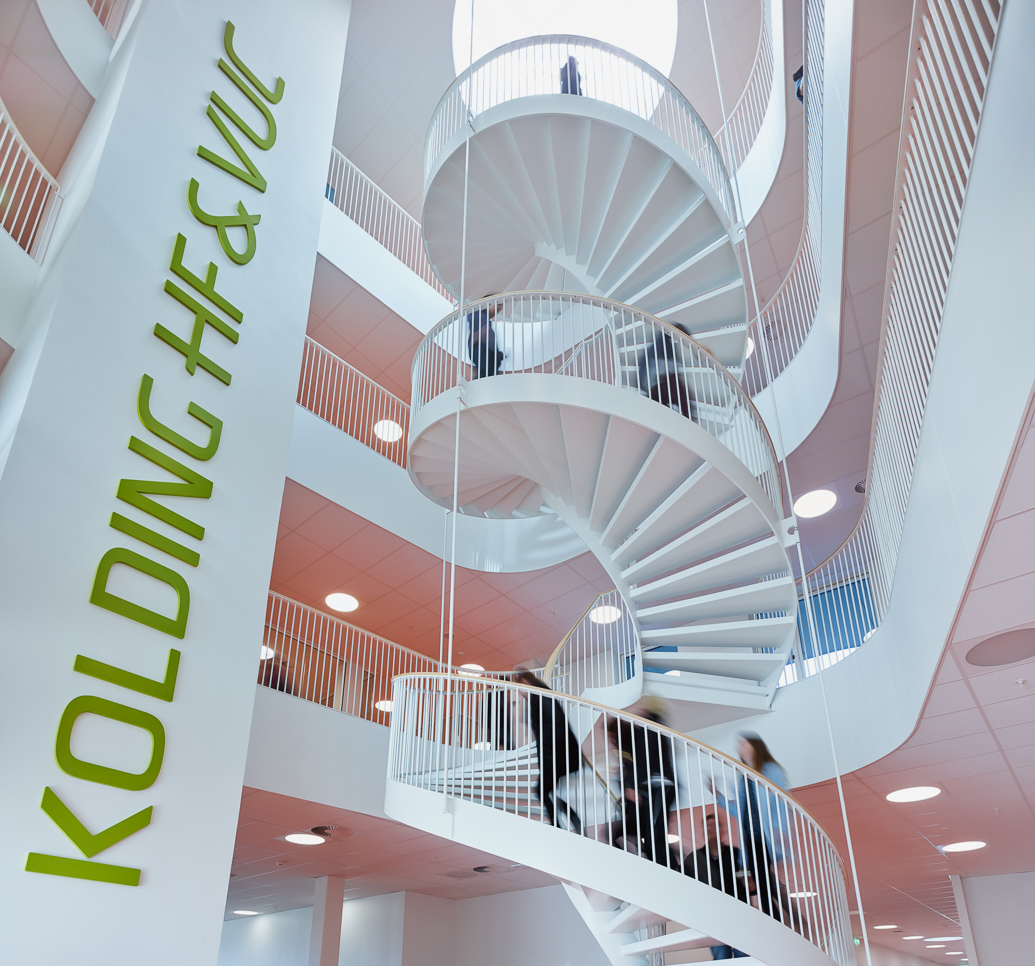 The central atrium of the house is carefully scaled and acoustically designed, so it is both a center for logistics, group work and informal living.

The new school four level space are constructed in a way that they make a base for a building on the whole construction space. The floorplans are many varieties of the same concept, which combine repeating structure of the space with diversity. The building has combination of classrooms, administration spaces and offices, as laboratories and large common areas, as well as large multi-hall.

Facade adapted to the diversity of context

The house is drawn from wide facade strips made of a copper-like aluminum plate. The strips mark the floors horizontally and smoothly follow the organic and different design of the floor decks. Towards the square, the composition forms a distinct urban house with high, precise facades and towards the river a more scenic expression that reflects the hilly terrain.

On all four floor plans, there is a high degree of integration between green outdoor areas and the interior environment. This provides both physical and visual opportunities for a fluid transition between the two.

Design City Kolding is characterized by the fact that all buildings must contain sustainable elements and be of high architectural and civil engineering quality. Openness and accessibility for all visitors is a fundamental thought for the use of Kolding HF & VUC facilities. The project has focused on a proactive quality management process, such as commissioning, which focuses on the interaction between total economy and installations.

The project has been designed with a sustainable focus, which is a prerequisite for fulfilling the whole plan of Design City Kolding, which is precisely based on innovation and sustainability through design.

In 2017., RUM was also invited to the competition for the construction of expansion of the same Kolding HF & VUC, where the developer now wanted to formalize the sustainability, in order to be DGNB certified. 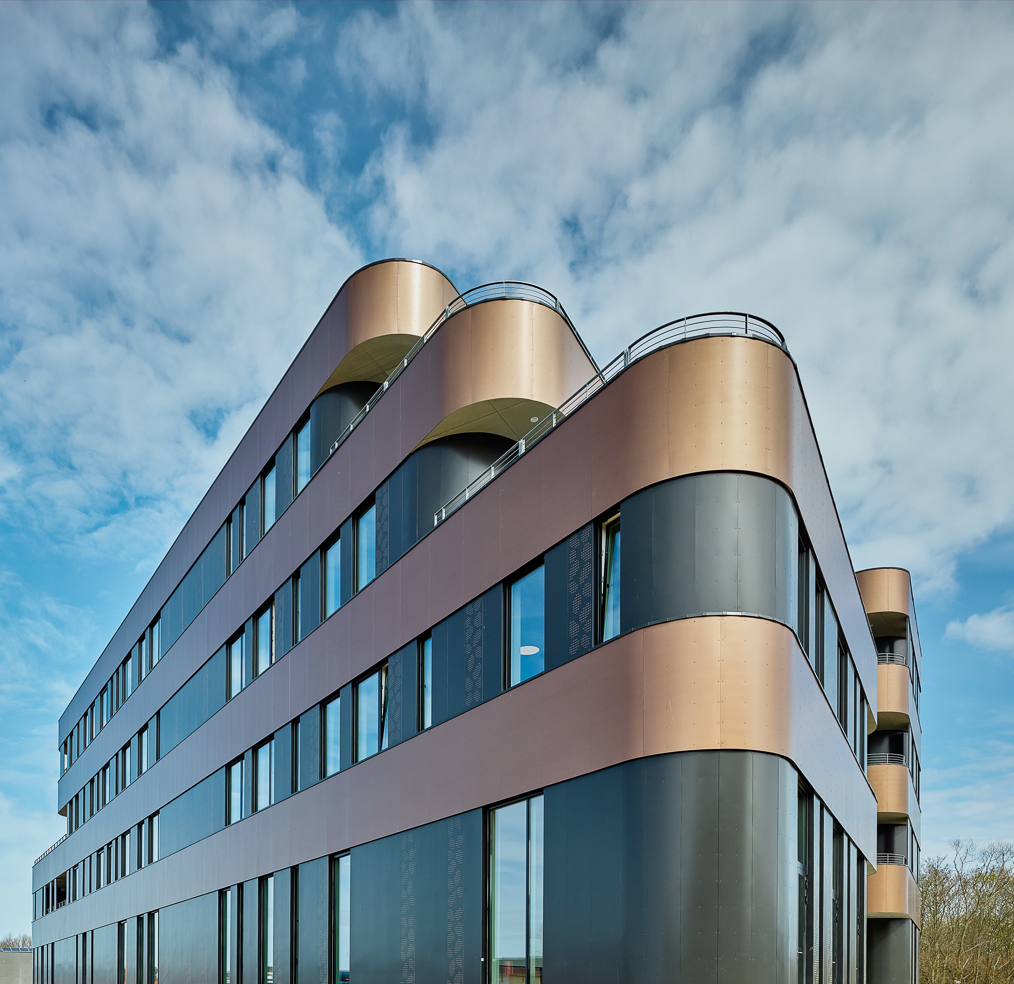 The house is designed from wide facade strips that are made of a copper-like aluminum plate.